Kermit D. Hoffmeier was born in the small town of Garnett, Kansas in the mid-1940’s. While growing up on a farm, Kermit became fascinated with machinery. At 10 years old, an entrepreneur was born when he bought his first tractor and began working the fields. Soon after he started raising his own cattle, and the local 4-H Council elected him as President for Anderson County.

After high school, Kermit left the farm behind and joined the U.S. Navy where he became an air traffic controller on the USS Essex aircraft carrier. After leaving the Navy in 1962, Kermit tried his hand as a life insurance agent. However, he missed working with machines and left insurance soon after to drive race cars on what was then called the NASCAR Grand National Division. This NASCAR circuit would later become the Winston Cup Series in 1971.

After a year of racing, Kermit pursued a couple of other endeavors, but eventually ended up working with machines again when he founded his own trucking company in 1971 called Royal Transports. The company grew rapidly, and six years later Mr. Hoffmeier sold it to Kaw Transport. Kermit helped Kaw double the size of the company in five years before leaving to become a land developer.

In 1982 Kermit was lured back to the trucking business when he formed Hoffmeier, Inc in Kansas City, Kansas. By 1989, Hoffmeier began looking for a new location with access to major highways and near an airport. This brought him to north Tulsa, where Hoffmeier relocated his business operations to North Lewis Avenue.

In years since, Hoffmeier’s reputation for quality service, professional drivers, and top-notch equipment have allowed the company to thrive. A truck repair shop was built in 1998, with a 20,000 square foot trailer repair shop added soon after. Kermit’s son Russ continued the family tradition by running day-to-day operations for over 20 years. 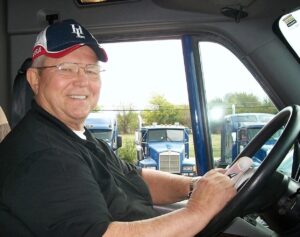 Mr. Hoffmeier retired from the business in 2020 and passed away in December, 2021. However, his legacy lives on through the companies he formed. For example, Hoffmeier, Inc recently added 8 new trucks and drivers to meet growing demand for their services. And the tractor and trailer repair shops continue to provide quality maintenance services on North Lewis Avenue. Kermit D. Hoffmeier was a man who proved that the “American Dream” is still alive today. He was one of a kind and won’t soon be forgotten.